This is the second part of a series commenting on what I have been reading in the works of Nassim Taleb, beginning with his book Anti-Fragile, part of the Incerto series. 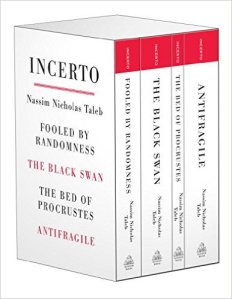 In the last article, I outlined his biography and introduced the questions of “What is the opposite of fragile? Are your scouts, scout parents, or scouters fragile? What are your duties as a scout leader in handling this matter?

Let’s return to the question of “what is the opposite of fragile?”

A quote from the previous article makes the point.

Amid all the hustle there are some worries parents can let go of, says clinical psychologist David J. Palmiter Jr., PhD, and author of Working Parents, Thriving Families: 10 Strategies That Make a Difference. Forget the concept of work-life balance, he says. It doesn’t exist. And the worries that you’re giving your kids the short shrift because both of you work? There’s no evidence to support that either, he says. In fact, there are many things that working parents worry about that aren’t really a big deal. But cultivating resilience is something that shouldn’t be overlooked, he says.

How important is resilience? It could have long-term health implications. A study published in the February 1, 2016, issue of Heart found that young men with low stress resilience scores were 40% more likely to develop high blood pressure later in life.

So how can you teach your children to bounce back—especially when you’ve got limited time?

I suggested that scouting provides a means of answer Dr. Palmiter’s question, “[H]ow can you teach your children to bounce back[?]” I made the point that you can’t teach resilience. You give it a chance to develop in presence of stressors and good role modelling. The scout learns how to behave amidst adversity.

Yet, I don’t think that discussion about resilience and “bouncing back” as presented by Dr. Palmiter truly answers to Dr. Taleb’s question, “What is the opposite of fragile?”

Remember my paraphrasing Taleb’s definition of fragile is being “susceptible to catastrophic and irrepairable damage in the face of a traumatic event.” If you do the logical exercise of reversing this definition, you end up with “strengthened in the face of traumatic events.” So what word in the English language suggests increasing strength in the light of calamity? We see this struggle for words in the news media all the time, “Driver uses heroic efforts to save drowning child” or “War hero saves his squad”. Yet hero suggests a person who fighting for his cause despite the risks (Taleb points out in his later books that the classical hero is a bit different, but that is for a later article). That is not the opposite of fragility. That is bravery in the face of being fragile. The “hero” is risking losing his life and takes the risk anyway. Hero describes the one-time act of bravery.

To truly be the opposite of fragile, what is weak must become stronger. One of the tasks of Hercules was to defeat Hydra. The multi-headed Hydra grew two heads where any one head was cut off. Each of Hercule’s slashes of the sword made Hydra stronger.

Taleb suggests a new word needs to be coined. He keeps it simple, “Anti-fragile.”

I have discussed author Mark Rippetoe’s Starting Strength on this site many times. Rippetoe explains that weight lifting makes a person stronger because the body is stressed by lifting heavy weights. Over the next 2 days, the body must recover from the exertion. At the end of the recovery, the body is not just capable of lifting what it did last time. The body can lift more. The body overadapts to the stress so that it is ready for a slightly larger stress the next time. A 100-pound bar is hard today, but so is a 105-pound bar in two days. After four more sessions, hard is now a 125-pound bar; the 100-pound bar is now relatively easy. This is intentionally using the concept of anti-fragile.

In scouting, that is our mission: offer the scouts stresses which are slightly more than they have coped with before in a safe and controlled manner. They adapt and come out stronger physically, psychologically, and emotionally. “Resilience” suggests an ability to bounce back like a rubber ball; deform slightly and return to its original state. “Anti-fragile” suggests an ability to return stronger than before.

Knowing about the notion of Anti-Fragile is just the beginning. It has many consequences. It has many ways of demonstrating that we make bad choices in life and even on campouts. A little foresight and consideration we can avoid many practical problems in life and in scouting.

But some of those consequences will have to way until Part 3 of this Saturday morning series. Until then . . . .

One thought on “Anti-Fragile and Scouting (Part 2)”

[…] Those questions do not seem very profound, until you think about it. So, I will do you a favor. I am going to cut off this article at this point. It will give you some time to consider the answer to his questions (or buy his books to cut to the chase faster). I will revisit this article in Part 2 next Saturday morning. […]