Reminder:  The North Star District PINEWOOD DERBY will be taking place on Saturday March 23rd at the American Legion Post #3, 6379 N. College Ave., Indianapolis, IN 46220.  Registration opens at 9am with racing action getting underway at 9:30am. 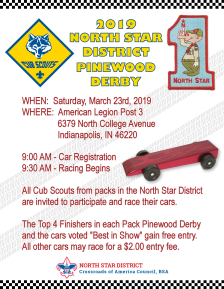 All Cubs are welcome!

Each Pack’s Top 4 finishers and each Pack’s “Best of Show” are entered in the District Derby automatically and free of charge.  All other cars may race for a $2 entry fee.

Boy Scout troops that would like to assist Packs in running their Derbies can contact District Pinewood Derby Coordinator Bill Buchalter.

This entry was posted in News, Pinewood Derby.

A fun time was had by all at this year’s North Star Adult Recognition dinner held at the American Legion post in Broad Ripple this past Saturday.

Eddie Stahl, our new Sr. District Executive, and Lee Murdoch, Crossroads BSA Director of Support Services, spoke to the group about their visions for 2019 as well as to recognize North Star adult volunteers for the phenomenal work they are doing for Scouts in our District.

Jerry Simon received the inaugural Jerry Simon North Star District Service Award of Distinction for his 30+ years of dedicated service to the District, much of that focused on mentoring Eagle Projects and leading Eagle Boards of Review.

Stephen Heath and Kevin Neese received District Awards of Merit for both of their continued tireless efforts with our District, and Peter Holtz received Scoutmaster of the Year for his leadership of Troop 56.  Mark Pishon received a special recognition for his above and beyond continual service and leadership to North Star.  Peter also wrapped up the meeting with a very fitting Scoutmaster Minute.

Mike Yates, the Pishons (Mark and Chris), Paul Kovach and Mark Maucere did a fantastic job of setting up this 100th birthday gala for North Star. 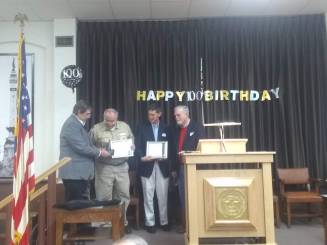 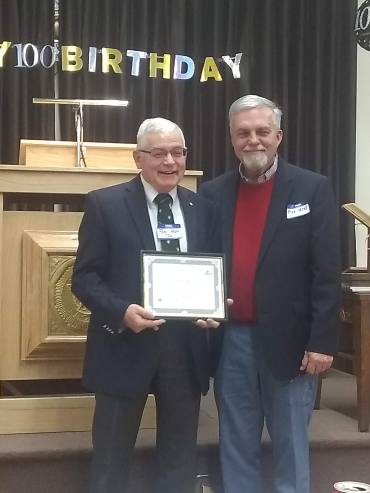 North Star District battled 8 inches of snow last weekend during their Winter Camporee.  Klondikes were all over the place hauling equipment, water, and supplies and the boys had a blast racing in them.
Congratulations to Troop 514 for winning the Willie Award and Troop 69 for winning the Patrol Competitions.
All the attendees enjoyed the North Star District 100th Birthday Cake.
Patches should be available in 3 weeks.  Don’t forget to log Frost Points in everyone’s camping log!
We look forward to the Spring Camporee April 5-7, 2019. 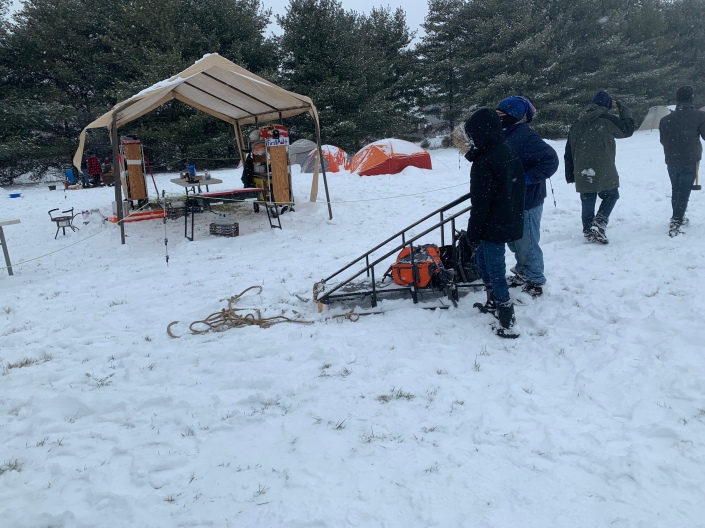 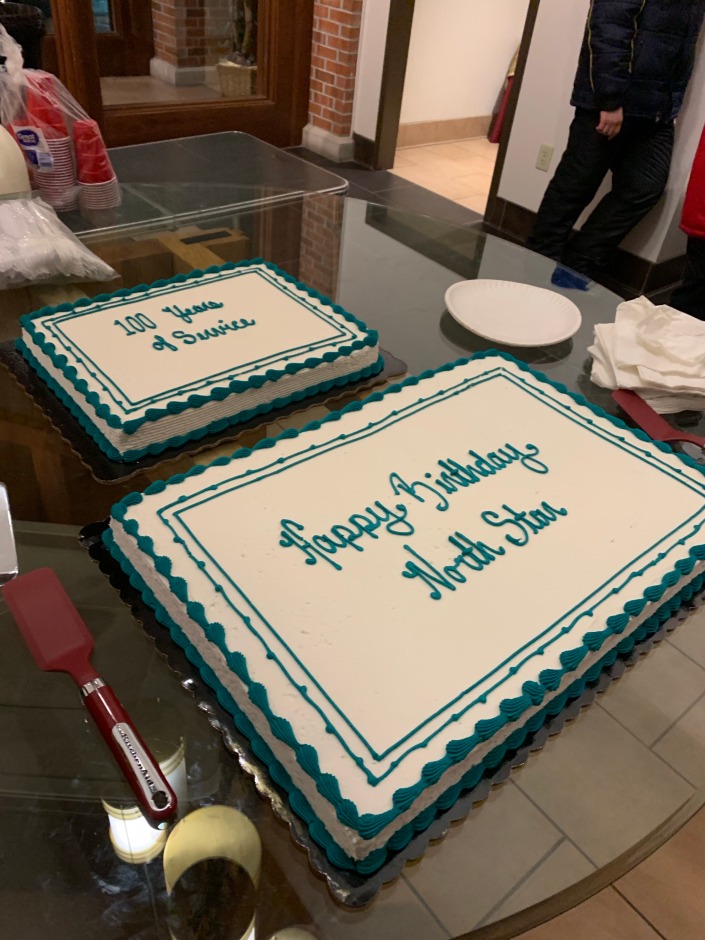 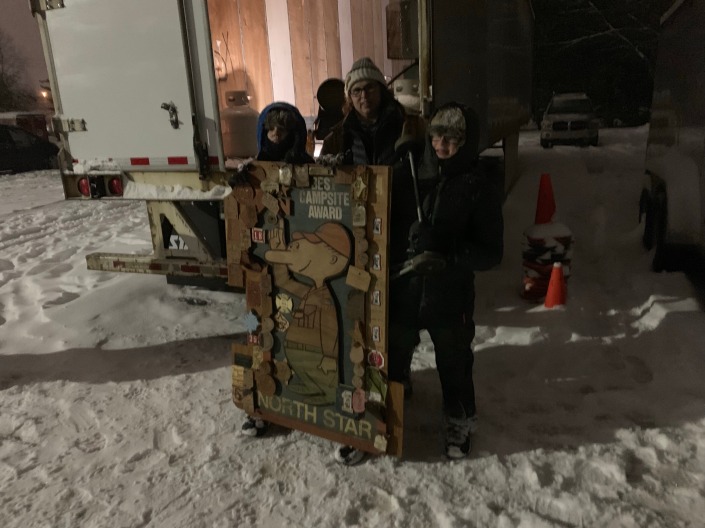 Congratulations to the seven Eagle Scouts presented with their medals at the Troop 358 Winter Court of Honor on Monday, January 14!

This entry was posted in Advancement, News.

Hope you will be able to make the 100th Birthday Winter Camporee!

WEBELOS especially, hope you can join us, for the overnight experience or for just the day

Register for overnight at the CAC registration site; RSVP requested for the day to Mr. Pishon.   See the previous article for more information as well.

Have a great time at the North Star District Birthday Camporee!

Check out these Indy-area sporting events and offers available to Scouts in early 2018 (click on the links below for more details):

This entry was posted in Events, News.

Please extend hearty thank-you’s to Jessica (Hofman) Steinacher for all of her hard work over the last year and a half serving the North Star District!

In addition – Paul Kovach will be stepping into the District Chairman role beginning in 2019, replacing Mark Maucere. The District Chairman is the lead volunteer for the District Committee which supports all of you in your roles in your unit. We would like to thank Mark for his hard work over the last year in his role serving the district, and welcome Paul into the role! Although Paul is stepping into the role, you will still see Mark around in various capacities.

Thank you for all that you do for Scouting, and we wish you a happy New Year!

This entry was posted in News.

Eddie joins us from the Three Fires Council where he has been serving as a District Executive since June of 2017. In his current district, Eddie has excelled by helping the district to meet goals and earning Journey to Excellence Gold. In his previous role, he has served as the staff advisor for the Council STEM Committee and the High Adventure Committee. Eddie also facilitated the Central Region District Key 3 course at Philmont Scout Ranch this past summer.

Eddie graduated from the University of Illinois at Chicago with a bachelor’s degree in Exercise Science – Health Promotion and a minor in Psychology. In his free time, he enjoys comedy, coaching football, live music and a lax game of golf where no one in particular is keeping track of the score.

This entry was posted in District Committee, News.

[The sports field parking lot is off of a street called 950 East which is on the west side of the church campus.]

The fee is $15.00 for each Scout, parent, or adult leader who will be staying overnight

on Saturday.  The fee includes the collectible Camporee patch. There is no fee for Webelos and their accompanying adults who will be visiting for the day, except to purchase a Camporee patch for $5 (optional).

Please Register at the listing on the Crossroads website:  2019 Winter Camporee Registration .

Keep an eye out for more Camporee updates coming soon!

CONGRATULATIONS to the following Scouts who passed their Boards of Review this month (December 2018): 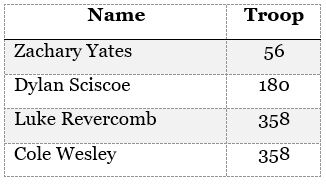 These four Scouts led the completion of over 650 project hours and earned three Eagle Palms between them (two Bronze and one Silver).  Hearty Congratulations Eagle Scouts!

This entry was posted in Awards, Eagle Boards of Review, News.