As I have watched the news this past weekend, I have seen families flooded by storms. I have seen individuals bring themselves to action with their own fishing boats saving lives, individuals delivering clothes and material to the Houston Convention Center, and first responders from all over the country arriving in Houston to support the local Houston first responders.

What contrasts these two sets of stories present about our modern American experience!

Scouting represents one of the most powerful sources of good in America today. We teach morality and citizenship through 12 simple points. The Scout Law is a powerful tool for teaching good citizenship and good choices.

Yet in modern scouting I see some well-intentioned persons in the national office pushing the latest buzz phrases of “anti-bullying.” This is a profound mistake and flaw in the scouting program. It is a mistake that unintentionally contributes to conflicts rather than calms conflicts. (I must admit the BSA’s approach is less egregious than other similar campaigns that I have seen. There are fewer “don’t” phrases and more “here are things to watch out for”.)

Have you ever watched your son run around a pool deck, right next to a lifeguard? What does the college-aged lifeguard usually do? The lifeguard yells, “Don’t run!” What happens? Your son may slow down to a jog or to a walk or to a skip. Very quickly though, the lifeguard’s admonition is forgotten. Almost certainly in the next 5 minutes, the lifeguard will again be yelling, “Don’t run!” again. Is this a lesson that boys just don’t listen?

Why does this work? (Trust me, it does work. Try it. My Pack meetings were energetic but easily managed.)

I have heard many different theories. One pop child psychologist (I forget whom) suggested it is  because “Run” is the last word that the boy heard, so it is the most likely to be the thought remembered. I don’t think this rationale is correct.

In my experience with boys throughout scouting, creating expectations of correct behavior through negation creates more problems. In plainer language, boys behave better when told how they are expected to behave rather than being told how not to behave. To me the reason this works is simple. A clear, simple command like “Walk” is easily understood and has very clear limits on what fits within the definition. This limit on the definition is fairly easily understood by six year olds, sixteen year olds, or sixty year olds. Even more importantly, all three ages understand it much the same way. You can ask a skipping 6 year old, “Were you walking?” and he will either say, “No,” or look at you with defiance and lie. Either way, you can see that he knows that he was not walking. Your job just got easier. If the boy says, “No,” you can quickly focus on the desired behavior and why it is desired. If the boy lies, you have to deal with the lie before you can address his skipping behavior.

Even so, the discussion can come back to the Scout Law. The honest boy now has one behavior to correct and one to be praised. You can say, “Thank you for living up to the Scout Law’s requirement that ‘A Scout is Trustworthy.’ That makes me very happy. But we still need to focus on ‘A Scout is . . . obedient. . . .’” With the lying scout, you will have to deal with both trustworthy and obedient. Either way, you are setting ideals of behavior and holding the boy accountable to those ideals.

Now let’s look at the notion of these well-intended but severely misguided anti-bullying campaigns.

Since I am not a school teacher, I don’t spend much time around schools or school children outside of my family’s circle of friends or outside of scouting. So I was struck when I walked into a public school hosting a competi- 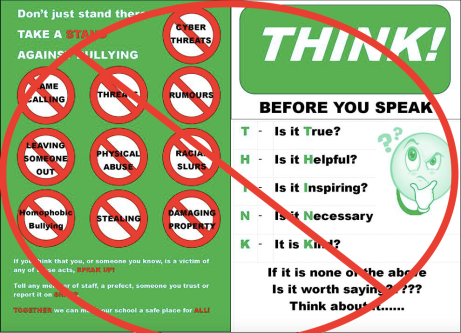 tion my son was competing in. All over the walls were “anti-bullying” posters, proclaiming how not to bully: “Don’t name call,” “Don’t threaten,” “Don’t spread rumors,” “Don’t steal,” etc. I didn’t pay much attention to it.

Then about three weeks later, I was in a troop meeting. One of the scouts had come to complain to the scoutmaster. This scout was known for stirring up confusion. His complaint read like an anti-bullying script, “George bullied me. He called me names. He threatened me. He stole my pocket knife.”

We actually fixed this problem rather quickly. We broke his frame of reference to anti-bullying by going back to the Scout Law. By focusing on ideals not fulfilled, the complaining scout had less freedom to manipulate the facts. Either he was not living up to the ideal or he was. When the focus was on “not,” it was harder to figure out what was good behavior.

I always use the analogy of swimming with a roped boundary, like in the BSA Safe Swim Defense program. If you set the expectation that the scouts “don’t cross the rope line,” some scouts will spend all of their time hovering at the edge of the rope. When they feel like they are not being watched, they will duck under the rope. The lifeguard then has to spend all of his time worrying about whether the infraction is caught or not.

If the expectation is to swim within the rope boundary, the lifeguard can enforce the rule by requiring the scout to move away from the rope.

The difference is that the “don’t” instruction is complete complied with until it is not. This would seem easier. The lifeguard knows clearly when the rule has been broken. Unfortunately, that means that the potential rule-breaker does, too. The fun becomes avoiding be caught break the “bright line” rule: the easily interpreted rule. The “ideal expectation” instruction is harder to identify when it is violated. Yet, it is easier to enforce. The rule-breaker can be called away from the edge of the rule compliance before the rule is broken. What joy is there in complying with the rule either way? The joy is in the rule breaking, not the near miss.

I have seen this pattern repeating in many different places. It happens with teenagers, college-aged kids, and adults. Many people have framed their entire worldview based on what behaviors, attitudes, or beliefs are forbidden. They are so focused on the forbidden or creating corollaries to what is forbidden that they are endlessly generating conflict, like my complaining scout example. They are focused on the boundary, not the unstated ideal.

I suggest a return to the ideals of the Scout Law as the core for discussions. The focus on ideals makes the scout and scouter focus on what unifies, what calms, and what improves.

Focusing on ideals is also easier for youth leaders to replicate. Long and winding explanations or negation boundaries are hard to remember and repeat. The Scout Law is already memorized by the Scout Rank. Once the youth leader learns to ask disruptive scouts, “What point of the Scout Law did you just break? What would be a better way to handle the problem?” the scoutmaster has less work to do. Isn’t that the point of scouting?

Then when we go out into the larger world, we can then serve as better role models to the people we know outside of scouting. When they are mad about being offended or by having their own personal morality broken by others, we can contribute to the calm and peace. “I understand that you are angry and offended, but what I don’t understand is what principles you are trying to foster? When you scream at family and friends about being offended, I am not sure I can describe what behavior you want to see. Can you tell me about those?”

I doubt that any Neo-Nazi or Antifa activist could answer these questions candidly or thoughtfully. Yet, the answer is not the key. It is the question. It suggests that you are unpersuaded by anger and misbehavior. More importantly you won’t act to support the anger and misbehavior. Nothing takes the wind out of complaining scout’s or an angry activist’s sails faster than evidence that misbehavior is not bending people to their will.

Ask a Neo-Nazi or an Antifa activist to go to Houston and help distribute clothing. Tell them how much you value that kind of dedication. What do you think would happen?

This entry was posted in Adult Education, News, Why scouting?, Youth Protection Training.