Haunted House for all Ages

This makes a great scout outing for all ages. The Children’s Museum’s Haunted House has haunts with

All Boy Scouts and Girl Scouts who visit the Children’s Museum Haunted House can earn a patch for free with their paid admission. Ask for the patch at the Bootique’s cashier (sign about patches hangs over her head).

Other special events that are especially appropriate for Cub Scouts, such as Feast with the Witches, is also available. See the Haunted House webpage for more information.

Look for some of your fellow scouts and District Commissioner staff, haunting at Xtreme Scream!

Sometimes our units are looking for service opportunities. Sometimes we seek service where scouts to gain entry for future unit placement. Scouts do well at schools and churches where they offer service to their current or future host chartered organizations.

We are seeking access back into Pike and Washington Townships.

Our District Executive just received this request for service from Pik High School. Please make sure you let your scouts how much they are needed for service and as ambassadors for scouting.

I am the event coordinator for Pike High School’s 2015 ISSMA Marching Band event being held on October 31st . It was suggested to me that the scouts may be able to help in our efforts to host this annual event. As a former scout, I know how scouts can make time for the community. (Trans Atlantic Council , Troop 1, Heidelberg, Germany) I understand some scouts may be needing community service requirements for Merit badges or other projects .

If this is something that would interest your troop, please let me know as soon as possible, as we are trying to fill as many spots as possible. I do have a “sign Up Genius “ set up that you could visit to see the type of positions available, anything from spectator parking to gate monitors , hospitality, admissions, hand stampers, water table monitor, and stand entrance monitors, We have two shifts available, or a person could volunteer the entire day, start times range from 9:30AM in the morning to 1:45 PM in the afternoon. All positions are over by 6PM.

The sign up genius is set-up for Parents , but we realize the maturity level of scouts and we know we can count on their assistance.

I do appreciate your consideration, and if this is something that can help your scouts, then Pike and the North Star District both win!

This entry was posted in Boy Scout, Ideas for unit outings, Membership, Volunteers.

Heather Brownell of the Heart & Soul Clinic in Westfield, Indiana has contacted volunteer organizations with the following plea for help:

The Heart and Soul Clinic is desperately in need of a group or organization to pull some weeds and cut back some bushes.  Depending on the number of individuals that help, I am guessing this should only take at most 2 hours.

Heather can be contacted at  (317) 804-5782. I am not going to post her direct email on the internet, but the information email for the clinic posted on their website is info@heartandsoulclinic.org.

Thank you to Troop 56’s Bill Cherry for this lead on an article.

This entry was posted in Community Service, Ideas for unit outings.

Two major programs are starting to encourage more youth visits to National Parks. First is the Open Outdoors for Youth.

The National Park Foundation’s Open Outdoors for Kids Initiative introduces and exposes kids — all kids — to experiential, outdoor experiences that promote physical and emotional health, civic engagement and long-term appreciation for nature. Using the spectacular and unparalleled resources of our nation’s more than 400 national parks, the program’s goal is to connect more children to their culture and heritage, enhance hands-on learning opportunities and deepen connections to the natural world.

Through focused programming in and out of parks, Open Outdoors for Kids addresses:

END_OF_DOCUMENT_TOKEN_TO_BE_REPLACED

This entry was posted in Camping & Outdoor Programming, Ideas for unit outings.

I was not appointed as the Committee’s secretary, so I did not take notes with an eye to that thoroughness. Nor was I a participant in each break-out session. With those warnings, I will highlight some of the discussions from the Committee Meeting.

Steve James, the District Chair, opened the meeting and emphasized that District needs to be focused on membership recruiting for August 27, 2015. He said, “We are in All-Hands-On-Deck mode. We need all Packs, Troops, and Crews to be part of the process.”  Steve introduced our new District Executive Cornellius “Con” Sullivan. Con rapidly covered the points about our Council-wide Back to School Night that Darin Stendl, Con’s supervisor, had covered at the May Roundtable. Jump to the link for a detailed report. The most important part of the presentation for this report is that the marketing campaign’s call to action for the general public is “Sign up at your local elementary school.” This means that we need personnel at all of our District’s elementary schools.

During his presentation, Con emphasized that we have nearly 43 elementary schools to cover at sign-up night, while we only have 35 chartered units and 18 Cub Scout Packs. There is no way that the Packs can man all of the elementary schools. Con also underlined that there is a Recruiting Rally at Victory Field in downtown Indianapolis on the evening of July 16, 2015. (Literature about the campaign is available on the Council website, too.)

In Darin’s earlier presentation he had emphasized that the call to action does not emphasize Cub Scouts. It is a general call to join Scouting. This means that Troops and Crews could receive new members, too.

Con reported that North Star District’s Cub Packs are encouraged to participate in a District-wide Pack Overnight Campout on October 17-18, 2015 (I will need to review my notes to double check dates) at the Indianapolis Motor Speedway. Other weekends and campsites are available if Packs have fewer conflicts, but IMS is being pushed for North Star. IMS is close to home and exciting. Race cars and another race themed aspects will be emphasized through the weekend.

After Con’s presentation, there was a general open discussion of some of the logistics. One issue brought up is that customarily Packs collect the initial dues from new families on sign up night. Council then asks for a check from the Pack to Council to cover the new recruits’ BSA dues. This lead to some surprise and frustration. In addition, there was confusion about how much BSA dues the Pack should collect the first night to be considered a completely “registered scout.” Con did not have the answer at that time. These topics would be addressed in more depth later. For the duration of the meeting, the Committee agreed to take the issue under advisement and focus on the immediate mission of recruiting. At the meeting Con promised to clarify a few of these issues as quickly as possible.

This morning, he emailed me some clarifications. END_OF_DOCUMENT_TOKEN_TO_BE_REPLACED

One of my regular refrains about recruiting is borrowed. “Get ’em in a tent, and you got ’em.” Boys of all ages want to camp.

When I was a Cubmaster, the most common questions the Cubs asked me was “When is the next campout?!” This was not really a question, so much as a barely contained exclamation on bouncing toes. They were fairly ready to explode.  When the answer was anything other than “tomorrow” they nearly burst like a balloon, looking completely deflated.

The same excitement exists at 11 years old. By the time they get to 15 or 16, they still love tents and campfires. Now the emphasis is less on being outside where they can run and now about time spent together around the campfire. Stories, gossip, favored games, personal challenges, and complaints of the day become a greater bonding experience.

Knowing that boys want to camp at all ages, even if the reasons for enjoyment change, what can we do to improve our recruitment?

END_OF_DOCUMENT_TOKEN_TO_BE_REPLACED

High Adventure Trips in Winter, Too

Our Team Leader for District Operations Darin Stendl joined our new District Executive Con Sullivan in attending our Roundtable Meeting last Thursday. At the RoundTable, the agenda was focused on High Adventure Trip Planning. As we were reviewing the opportunities provided by National Council, the topic of Minnesota’s cold weather program Okpik came up.  I asked if anyone was familiar with Okpik. Darin volunteered that he had attended twice.  As a result of his story, I asked him to END_OF_DOCUMENT_TOKEN_TO_BE_REPLACED

Tonight at Boy Scout Roundtable, District Commissioner Jeff Heck led a discussion of high adventure for boy scouts and venturers. He talked about the opportunities for units to provide high adventure and its benefits to the program.

END_OF_DOCUMENT_TOKEN_TO_BE_REPLACED

Our June Roundtable will be held, as always, beginning at 6:30 p.m. at Second Presbyterian Church, 7700 N Meridian St, 4th Floor, Indianapolis. RSVPs are welcome, but not required.

We plan on introducing our new District Executive Con Sullivan. He will be asked to give a few remarks.

The opening general session will be “Maximizing Council Resources for Your Unit” by District Commissioner Jeff Heck.

Sharla Merrick our Cub Roundtable Commissioner will host a conversation on Cub Recruitment, with a special emphasis on what will be happening in July, August, and September this year.

Jeff Heck will host a conversation about planning high adventure and using fellow district members as resources.  We will discuss BSA bases and non-BSA trip ideas, planning cycles, and problems to watch out for.

Please be sure to invite any and all adults from your units. It is very important to get as many membership coordinators from all of our units to participate in Sharla’s discussion. Cub Recruiting this year is going to require Boy Scout Troops’ help, so please have your membership coordinator attend.

Two separate American Legion Posts have teamed up with local scouting units to gather and give respect for military members who have died. Each gathering is a little bit different. 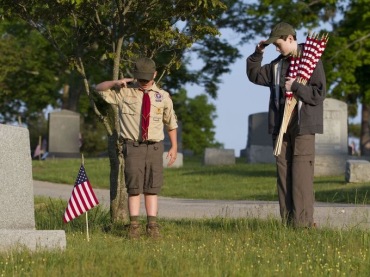 Post #79 serves as the chartered organization for Pack 105, Troop 804, and Crew 408. These units will gather together. The units will then break into teams to place flags on military graves in and around Zionsville.

In Broad Ripple, the American Legion Post #3 hosts a slightly different event on Saturday, May 23, 2015. This event is open to all scout troops, regardless of chartering organization. For the past 10-15 years Troop 18 has participated. In recent years, Pack 35 and Troop 35 have participated, too. Post #3 serves breakfast beginning at 7:00 AM at the Post, located at 6379 N College Ave, Indianapolis, IN 46220. This Post places flags at Union Chapel Cemetery and Crown Hill Cemetery. To participate in the breakfast, the Post asks for RSVPs by Wednesday via email to Rees Morgan or by phone to (317)924-2154.

If units decide to participate in the Post #3 event, please provide statistical information at this link.  This does NOT replace the need to contact Mr. Morgan, but it does help the District Programming Committee track participation in community events.